Over the Garden Wall: an autumnal masterpiece from Cartoon Network 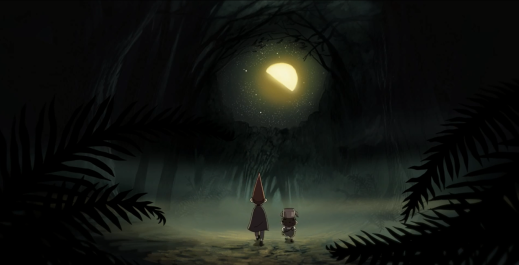 Over the Garden Wall is so good, so successful at everything it sets out to accomplish, that it is something of a miracle. I cannot fathom a better TV show debuting this year.

Over the Garden Wall tells the story of two brothers- the teenage Wirt and the much younger Greg- who have gotten lost in a forest. They are trying to find their way home. Early on, they run into a talking bluebird named Beatrice. Yes, this all sounds familiar. This show’s roots are in the fables and folklore that we seem to absorb through osmosis as children. This is a show with singing, magic, talking animals, witches, and more than the occasional sinister creature in the shadows. It contains elements that will be familiar to anyone who was a child. It’s how it uses those elements that makes it so special.

Many reviewers have given in to the temptation to describe Over the Garden Wall as whimsical, but it rarely struck me as such. Yes, Wirt is inexplicably dressed like a gnome, and Greg has a teapot on his head, and yes Beatrice is a talking bluebird. But Wirt’s and Greg’s costumes are given rational explanations in due time and Beatrice is neither a friendly Disney-style sidekick nor a snarky Shrek knockoff. She’s blunt and critical in a big sisterly sort of way and we grow to like her because her story is as compelling as any in the show. And it never stops telling compelling stories.

There is precious little exposition in this show, both for the plot at large and episode to episode. Each episode is largely contained to a single-serving of a new setting. In the first episode, the brothers end up in the home of a strange man living in the woods, warning them of a sinister creature he calls the Beast. Other settings include a town populated by sapient pumpkins; a sprawling, apparently haunted mansion owned by a tea mogul; and a steamboat transporting some very well-dressed frogs to their annual mud hibernation. This narrative approach is extremely engaging, giving the plot a constant sense of headlong momentum, even as it takes it sweet time exploring each world in detail.

And lord, what detail.

Over the Garden Wall looks so good that you could choose just about any still and want to frame it. It is autumnal in the best ways, alive with color and character.

The show frequently uses old-fashioned motifs, but they rarely seem to be calling attention to themselves. Techniques like the iris lens above are a callback to silent movies, but it also gives the opening sequence of the show a dreamlike quality that sets the tone before the story starts.

Before each episode, I found myself looking forward to simply seeing where Wirt, Greg, and Beatrice would go next. Each location is cool on the surface, and only get cooler as their layers peel back. In one episode, they end up in a creepy cottage where a teenage girl is held captive by her fearsome Auntie Whispers. Auntie Whispers looks like how Yubaba from Spirited Away might appear after spending a few years bathing in formaldehyde. But she is not simply a grotesque. Auntie Whispers ends up being one of the most interesting of the show’s vast roster of side characters, and the episode’s story takes a turn that is surprising, scary, and incredibly satisfying.

Another episode features a schoolhouse full of animals, being taught by a lovelorn human schoolmarm. In this show’s style, there is almost no setup preparing us for this setting, but eventually there is an explanation for it that somehow ends up making sense. One of the show’s delights is how heedlessly it explores its settings, and how thorough that exploration is.

There are plenty of musical sequences in Over the Garden Wall, and they are just about all delightful. Well, if not delightful, then excellent. This scene is the sort that would have haunted my dreams a kid:

That is a gloriously creepy 30 seconds. I don’t intend to show too much more of this show out of context, but here’s another, completely different song from another episode:

Over the Garden Wall uses music to set the tone its episodes beautifully. The first song is as jarring and disturbing as the second is jolly and fun. The first song creates a sense of deep unease. It’s downright trippy. The second helps define Greg as a character: infectiously optimistic and fond of nonsensical, improvised wordplay. The show navigates between these tones (and many more in between) effortlessly. At times it is pure delight and others genuinely frightening and all the while we get to know its characters a little more at a time until we are completely invested in their journey.

For all the rightful plaudits Over the Garden Wall receives for its animation and music, it is as good as it is in the same ways that any good show succeeds: strong characters, quality writing, excellent performances. The show’s creator, Patrick McHale, is yet another graduate of the Adventure Time/Misadventures of Flapjack school of animators who continually churn out outstanding shows (see also: Gravity Falls, Steven Universe, and Bee and Puppycat). Over the Garden Wall’s writing team includes a number of the best Adventure Time alums, including AT creator Pendleton Ward and alums Natasha Allegri and Cole Sanchez.

Wirt, Greg, and Beatrice are brought to life with outstanding voice acting by Elijah Wood, Collin Dean, and Melanie Lynskey. Wood’s voice has a constant tremble of harried anxiety, warm towards his brother, defensive towards Beatrice, and always at his wits end. Dean is charming as Greg, who is one of the best written child characters I’ve seen on TV in a good long time. It’s difficult for adults to write convincing children. Greg is not simply a fount of energy. Like many young children, he is endlessly curious about the world around him and equally lost in his own imagination. \

Beatrice is the show’s biggest scene-stealer, a slightly amoral bluebird (I did enjoy writing that phrase) whose clashes with Wirt slowly evolve into the sort of affection that comes with deep mutual empathy. Lynskey’s performance is warm but not fuzzy. Beatrice is the show’s most conflicted character, and Lynskey’s voice seems naturally laden with gravity, buoyant as it can be.

Each character is quietly dynamic in their own ways. The show has no use for preachy moralizing; its characters’ revelations are deeply personal, rooted in their relationships with each other and how far they realize they are willing to go for each others’ sakes. And I was just as invested in them by the end.

Over the Garden Wall billed itself as a “5-night Mystery Adventure”, and that’s apt. The show’s sense of mystery is not a parlor crime novel, but something more childlike. It reminded me very much of Spirited Away, a film that observed a fantasy world from a outsider, child’s eye view, with every new and amazing sight raising a new set of mysteries. With 10, 11-minute episodes, you can easily watch this show in its entirety over the course of the week in 22 minute chunks. Or you can take it all in at once (since all the episodes add up to less than two hours), and have the best fantasy movie experience of the year. You can buy the whole show on iTunes for ten bucks, and it is worth every penny and then some. If you have cable, you can find it On Demand. However you watch Over the Garden Wall, just make damn sure you watch it.

Edit: While looking for other reviews of this show I realized that I gave this post almost the exact same title as this article on Bloody Disgusting. It was a coincidence, but something still worth rectifying as that article came out before I posted mine. I have now changed the title.

Tags: over the garden wall, TV