What I Did For Love (or not): A tale of a magnificent, much hated ballad 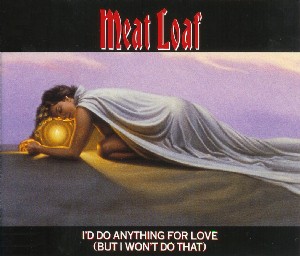 I don’t talk much about music on this blog, and this next statement might well be evidence as to why: Meat Loaf’s “I’d Do Anything For Love (But I Won’t Do That)” is easily one of my favorite songs of all-time.

“I’d Do Anything For Love (But I Won’t Do That)” has no sense of self-awareness, and is 12 minutes of relentless cheesecake. It is the lowest of low hanging fruit on the “let’s bond by all making fun of a song that no one is going to feel compelled to defend, so we can mock free of guilt” tree.

But here I stand.

Even if “I’d Do Anything For Love (But I Won’t Do That)” is a terrible song (it’s not, or I don’t care),  it’s in a grand fashion. And its massive success in 1993 (it went number one for five weeks) is not an embarrassment. No, the same culture that could embrace a song by a 46 year old man named after a congealed meat dish, who had gone more than a decade without a hit, giving it his absolute all on a song that could only be sung by one with nothing left to lose, could also embrace a film whose primary appeal was “Dinosaurs are amazing and you know it” or a TV show about beautiful FBI agents perpetually searching for a truth that might just be out there.  Jurassic Park and The X-Files have better stood the test of time for good reason (they are legitimate classics in their mediums and genres), but they thrived as entertainments of sincere conviction in an environment willing to give in with wide-eyed enthusiasm.

What I’m saying is, sing on, Meat Loaf, and let no one tell you what you won’t do.

P.S: If you can’t enjoy this holy mess of a video, we can’t be friends.