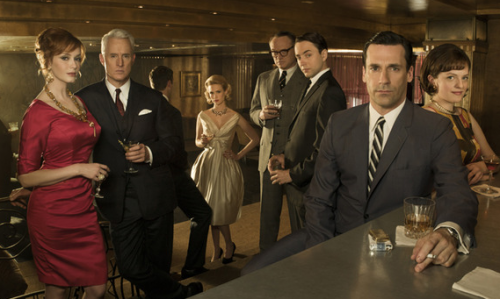 I’m diverging today to talk about a TV show that rivals any film as among the best artistic achievements since the 2000s began.

Many, much longer pieces have been written about AMC’s magnificent show Mad Men. I’m just going to focus on my favorite aspect of the show; it’s perfect, scene-based storytelling. Warning: I will discuss plot spoilers below, so don’t read on if you haven’t caught up on the show.

I say “scene-based” to differentiate from “plot-based”. Procedurals and thrillers tend to be the latter. We can predict the outcomes of scenes based on the requirements of the plot. Changes to these expectations are used to surprise us or to generate suspense. At its best, 24 was about the pinnacle of this kind of televised storytelling. 24 didn’t have cinematic scenes that touched emotional chords. It was, however, absurdly entertaining and as good a pure thriller as you’ll find on TV.

Mad Men, however, rarely has conventional plot threads. Some stories, like the slowly dampening spark of Roger and Jane Sterling’s marriage, have taken actual years to unfold (they got married in season 2, and only now do we see the signs of weakening that we all knew were going to happen.

Like in real life, major turns in the story often emerge unpredictably. Betty happened upon Don’s “Dick Whitman box” late in season 3, and only decided to leave him in the final episode. While this was one of the show’s biggest plot developments, it wasn’t telegraphed. There was no reason to predict it happening. Sure, Betty and Don were unhappy together, but that had been the case since season 1.

No, Mad Men’s storytelling is more elegant that that. Some of the best episodes seem more like plays than standard TV fare. Plays often require character development almost purely through dialogue and interaction. Matthew Weiner seems to realize that, unlike plays, he has the luxury of letting his stories unfold through several years of scenes, rather than the two to three hours a play would give him.

As a result, Mad Men moves its story along through perfectly constructed scenes, all of which add something to these characters, and increase our familiarity with them. A plot-based show demands scenes that service the advancement of the story. In 24, these would usually involve Jack Bauer getting into a shootout, interrogating a suspect, etc. They’re a necessary part of the show. But Mad Men gives us episodes like season 4’s “The Suitcase,” which consists almost entirely of a constantly-flowing conversation between Don and Peggy. They run through a range of emotions, spill some secrets, and come away from the episode with a much deeper understanding of each other, one that has had an impact on all subsequent episodes (Don has since been significantly less hard-assed toward Peggy, whom he has always admired and therefore pushed).

Elements of that episode that would have been used as plot points in other shows (such as the Peggy finally dealing with her old flame Duck, or impending death of Don’s beloved friend Anna) are only touched upon briefly here, but their impact is much more significant. At no point in the show did we ever think of Peggy’s ill-conceived fling with Duck or Don’s relationship with Anna as plot devices. So when Duck drunkenly bursts into Sterling Cooper Draper Pryce and confronts Peggy and Don, or when Don breaks down and tells Peggy about Anna, the impact cuts deep. We knew these stories innately. We could relay them the way we’d relay them if we actually knew Don or Peggy in person.

At its core, scene-based storytelling demands patience. Each scene is going to matter at some point. You just have to trust the storyteller. And when a show like Mad Men has built up characters as beautifully constructed and acted as Peggy Olson, Don Draper, Joan Harris, Roger Sterling, and even supporting players like Betty, Pete, Lane, and Sally, it begins to reap exponential dividends of storytelling satisfaction.

The elegance of “Drive”

In a superb post on his blog “Cinema Styles,” Greg Ferrara likens the visuals of movies like “Hugo” and “Avatar” to Thomas Kinkade paintings: bright and glowing, but lacking any formal elegance or visual ideas beyond being really shiny. Let it be known: I liked both of those films. I just thought neither was all that good-looking, despite the swarms of visual Oscars that both won.

Watching “Drive” again the other day (it might have been my favorite film of 2011) I was struck by how damn elegant the movie is. Its actions move forward, clean and taught. Individual shots contain enough information for us to glean what’s happening and guess what will happen next, but are still artful and without clutter.

Look at the opening of the film’s first chase scene, for example:

So much action in the movies assumes that movement is entertaining in and of itself. “Drive” is a film that understands that buildup can raise the heart rate as much as action, and that letting the viewers actually see everything that’s happening on screen can be helpful in maximizing our level of entertainment.