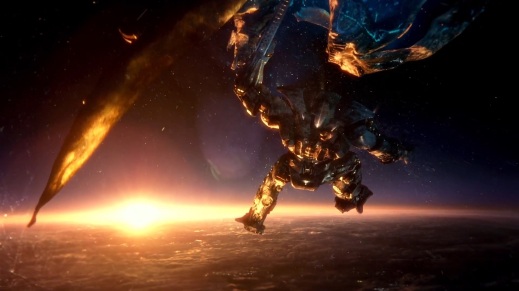 I liked Pacific Rim for reasons that extend beyond “HAHA BASEBALL BAT SHIP!” It’s a really beautifully put-together film, and I want to talk about that a little. If you liked the film too, hopefully you might want to keep reading below the cut. Spoilers ahead!

One of the more tiring defenses of badly made blockbusters is “well, they’re not supposed to be great art, they’re supposed to be entertaining, gosh stop being such a Farty McArtpants and just enjoy yourself!”

And nay I say to that, that’s poppycock and foolishness. Man of Steel, Battleship, Tron Reborn: Fresh and Tronnier, Prince of Persia, (insert your favorite not-fun big budget movie here, since I’m just running with ones I’ve seen), and almost the entire filmography of Michael Bay sucked because they weren’t entertaining. It’s fine to be brainless and fun, but being not fun and claiming “I just want to have fun!” as your defense makes a film both stupid AND a liar, and we just don’t tolerate that in polite society.

“But isn’t entertainment subjective?” someone says.

Yes, yes it is. Just in the last two weeks, millions of Americans have glanced up at their theatre marquees and said, “yes, another round of Adam Sandler farting on Salma Hayek, please. If we’re lucky, a deer will piss on him this time!”

But back to “tentpole” films. I’m gonna use Man of Steel as my punching bag here, because it’s the most recent and freshest on my mind.

Being a piece of pure entertainment is no excuse for being shoddily cobbled together, and the quality of the basic elements of the language of cinema is one the the prime reasons Pacific Rim succeeds where other tentpole-type films have left me bored.

Why didn’t I find Man of Steel, among other films, entertaining? And why did I like Pacific Rim so damn much in comparison? Well, let’s list this sucker:

One of the most annoying aspects of Man of Steel was how Zack Snyder essentially used Superman’s ability to fly really fast as an excuse to not give a crap about giving the action scenes any cohesiveness. Without a sense of where the characters are, and why they are doing what they are doing, action quickly devolves into directionless, noisy movement.

As I have said before and will continue to say as long as The Avengers remains a good film, one of the key reasons The Avengers was so enjoyable was that its action climax was more concerned with giving each primary character something to do, and then following each of them coherently as they carried out their tasks, than it was with constantly filling the screen with noise and movement. It was a series of mini-fight scenes that, when sewn together, created this thrilling ballet of action.

Man of Steel repeatedly uses the gimmick of “baddie prepares to break something, Superman flies out of nowhere and tackles them”.

Yes, there’s a larger overlying point to it (stopping the world engine from making earth a cold dark place), but at one point Superman tackles Zod and just… stands there for the next few minutes. Like, he tackles Zod, an extended sequence involving Lois Lane and the scientist dude aboard a sizable, crashing ship plays out, and then it cuts to Superman and he’s still standing there on the ground like what the hell are you doing dude.

Pacific Rim has an inherent advantage in this department because the number of pugilists fighting at any time is small (usually just a jaeger and a kaiju), and they’re always in close proximity.

But the movie is so damn generous with its cinematography and editing like wow, what a sweetie. I don’t have an official count on this, but on my second viewing of the film today, I spent much of the Hong Kong battle timing the length of individual shots. Again, very informal, but shot after shot came in at 10-15 seconds. For comparison, the average shot length of a jumpy film (think Bourne or Transformers) is about 3 seconds. The film didn’t simply cut away every time a character moved, and many shots were actually allowed to breathe, framing both characters and tracking their movements without cutting. This allows the action scenes to play out with a sense of flow and tremendous scope that constant cutting would have undermined. Getting to watch these giants fight requires a constant sense of visual scope, letting us frame them against their surroundings, and longer shots allow for that.

And the film’s cuts had a consistent sense of direction. If a jaeger’s hand leaves the frame on the right, we can assume the next shot will be it making contact with a kaiju’s face, coming in from the left side of the frame. This may seem simple, but modern action has largely dismissed the idea of visual continuity. Even good films, like the Dark Knight movies, suffered from confusing editing and shots cobbled together without much sense of direction or timing.

The scene where the two remaining jaegers are descending into the ocean to destroy the kaiju rift is a splendid example of classical framing and editing. The jaegers are shown  descending into a massive underwater trench from above, and the film cuts to a shot from the same direction, overhead, showing them from even higher altitude, making them look downright tiny in the vast ocean.

The next shots show the jaegers descending further into the trench. The camera switches to a dutch angle (where the camera in on the floor, looking up at the subject’s face). Usually this shot is framed to make the subject appear powerful or intimidating. But its use here is actually practical; the next shot is another dutch angle from farther down the trench that the jaegers are about to leap into. The shot then descends into the trench without cutting, and then one jaeger’s feets slam onto the ocean floor, then the next. It’s a delightful little bit of cinematography, letting us travel down with the jaegers on this pivotal, climactic journey. That sense of care and craft with the camera and in the editing room can make little moments all the more engaging, and the big moments significantly more exciting.

Exposition is a necessary evil in genre films. The world the characters inhabit is essential to the audience’s understanding of events, and certain rules need to be established and aspects of the world explained. It’s one of the reasons superhero films inevitably devote large sums of time (often to the tune of the entire first movie of a series) explaining the origin of the protagonist’s powers.

There’s a reason so many films rely on the combo of a protagonist who is unfamiliar with the film’s world and a friend they latch on to to explain said world. It’s a clean and easy way of explaining things in a way that doesn’t feel like the movie is just giving us a verbal rundown of how things work. By making the protagonist an outsider to the film’s world, or at least by having an outsider in the mix (think Ariadne in Inception) the movie can explain its rules to us while keeping us engaged.

The problem is, this ends up taking up a lot of valuable screen time. And Pacific Rim is just gonna have none of that. It frontloads the exposition into the film’s opening act, giving us a clear understanding of the nature of kaiju attacks, the rise and fall of the jaeger system, and the stakes that the film is riding on. It also gives us the backstory of its first protagonist, Raleigh, setting his character into motion so that a second protagonist (Mako) can provide the emotional ark of the film, in conjunction with Raleigh, since the characters are neurally and emotionally linked. The film can jump right into the link they intrinsically share, and we understand why it’s so important, because the movie frontloaded its explanation of “drift compatibility” and isn’t it nice that this movie is moving so quickly and efficiently?

Three little words, so much meaning in comparison to Man of Steel.

Edit: I mistakenly used the phrase “dutch angle” when I should have said “low-angle shot”. A dutch angle is a tilted shot that causes subject of the shot to be angled oddly. A low-angle shot is when the camera is placed low, looking up at the subject. A low-angle shot can also be a dutch angle, but I don’t think the examples I used in Pacific Rim qualify.