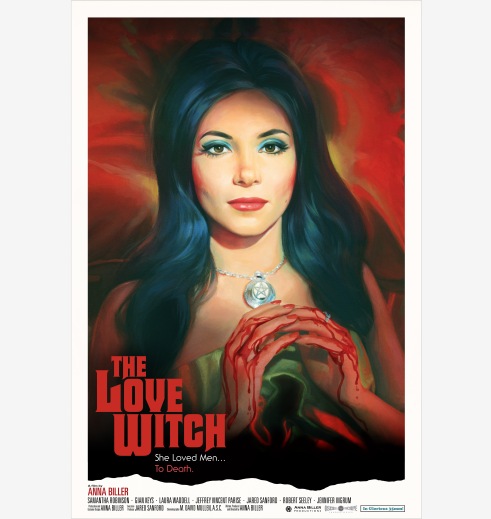 I wouldn’t normally put a film that came out last year in my Blindspot list. But sometimes a strange little indie that I overlooked the year it come out intrigues me with a premise so odd and a visual style so compelling and that I prioritize seeing them sooner than later. The Duke of Burgundy, The Assassin, and Blue Ruin are some other examples in recent year. And earlier this year, when I began seeing gorgeous stills from The Love Witch circulating around numerous blogs that I follow, I was hooked. 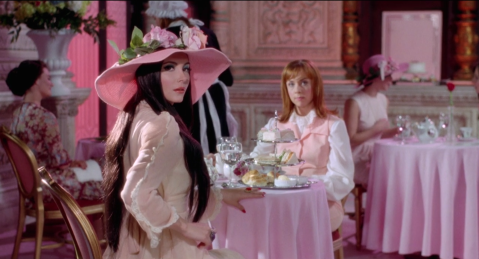 Simply as an exercise perfectly replicating the look and tone of 1960s camp sex comedies, The Love Witch is a remarkable achievement. Except for the fact that some characters drive modern cars, there is no way to tell that this movie wasn’t made in the 1960s on sight alone. It’s easy to imitate the look and feel of the 60s, but Biller goes a step further: her film has the look and feel of a soft-core exploitation film, but its story is actually a rather scathing commentary on modern, still relevant sexual politics.

The film opens with Elaine (Samantha Robinson), a young witch with a penchant for bright pastel outfits and a desire to find true love as quickly as possible, no matter the cost, driving to her new apartment. Right out of the gate, we learn that her first husband died, and despite her denials in her internal monologue, the list of suspects consists of her. She needs a place to lie low, and a fellow witch finds her an apartment which she has already had decorated to look like, well, a witch’s apartment. 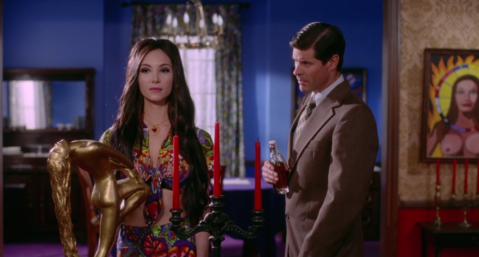 The sets, costumes, and color scheme are all part of the profoundly immersive visual experience that is The Love Witch. The gaudy, popping colors make the film’s deliberately campy acting and dialogue fit right in. The plot, too, feels like fairly typical sexploitation camp, right up until the bodies start to pile up.

Elaine wants more than anything to fall in love, and she’s not patient about it. She uses love potions to win men over and enrapture them in a moment’s notice, but after sex they become overwhelmed with sadness, turning into blubbering messes. Then they die. Elaine hides the evidence and then tries again. 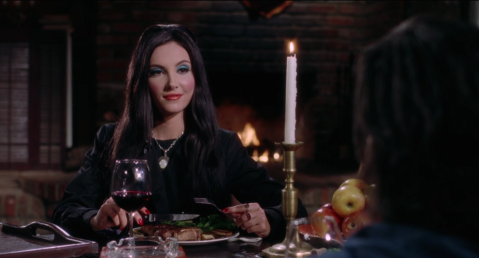 Anna Biller, who wrote and directed this film, has a sharp eye for satire. Elaine is a textbook naive romantic who simply takes her single-minded devotion to love to desperately absurd lengths. Elaine’s magic doesn’t seem necessary for her to initially seduce men; indeed, every single male character in the film views women as objects for entertainment, not people. But that her magic unlocks emotions that they were terrified to feel? And that those emotions literally kill them? It’s not subtle satire, but it’s very entertaining. 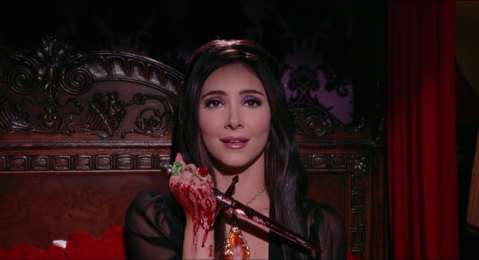 The Love Witch does run too long; there isn’t really much story here, just situations in which Elaine’s theories about getting someone to fall in love with her get tested and tested again until she can no longer cover up that she is, by any definition, a serial killer. Biller raises the stakes in the story by both having witches and magic be  well-known commodities in society. That means there are inevitably anti-witch mobs as well, posited as the sort of misogynists who use the threat of rape and violence as a perpetual bulwark against women. And, well, Elaine isn’t really all that safe in her witch community either. We see early on that she resents the presence of Gahan, a warlock who it is hinted used his position as a mentor to Elaine to take advantage of her.

Early in the film, Elaine explains why she uses a seduction approach that involves pampering her targets’ insecurities and playing the part of a submissive vixen. “Men are very fragile. They can get crushed down if you assert yourself in any way,” she says. This worldview ends up getting flipped on its head many times over throughout the film. The statement remains the film’s thesis, but the context gets radically altered. At first, Elaine sees it as her path to winning true love; give a man sex, coddle his insecurities, no matter how puerile (her first target, a professor named Wayne, sobs that there are no women who are both smart and sexy enough for him to truly like), and voile, he will fall for her. That they immediately die might be a statement on how masculinity stunts men’s emotions and reduces their ability to interact with women to purely sexual terms. Elaine doesn’t need magic to get men to bed, but the potions she gives them to connect with her as deeply and purely as she hopes might as well be poison. 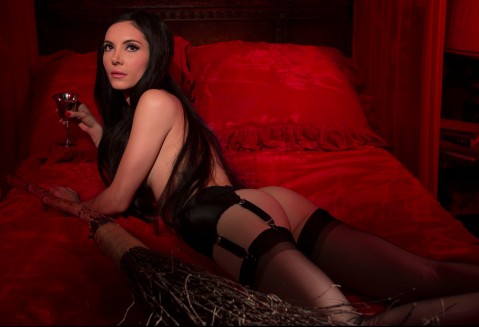 Biller grapples with some incendiary material here, all without ever deviating from the tone. A lot of that comes from how ripe 60’s exploitation films are for satire. Exploitation films used sex and nudity for cheap thrills; Biller uses them to ask tough questions about our culture’s views on love and sexuality. Biller doesn’t shy away from the ugly aspects of the genre; she uses satire to give them substance that an exploitation film wouldn’t provide. There is a genuinely disturbing scene where a mob threatens to rape Elaine. Biller gives the scene proper weight and sense of terror, and thankfully Elaine escapes. There is an ugly amount of sexual violence against women in TV and film, but Biller is at least saying something here about the threat of sexual violence that women regularly encounter, instead of simply trying to shock us.

The Love Witch is a sardonic, funny, beautifully shot film with a weary and pessimistic view of society, of masculinity, and of the world for a genuine romantic like Elaine. At the end of the day, she isn’t really judged for the bodies she leaves in her wake. And you know what? Films and TV shows ask us to forgive and like far more ruthless male serial killers all the time. The Love Witch simply asks us to understand how much Elaine loves being in love, and how unfortunate it is that she receives so little in return. Is that too much to ask? Or maybe I just fell under its spell.