The Whispered Nightmares of “The Witch” 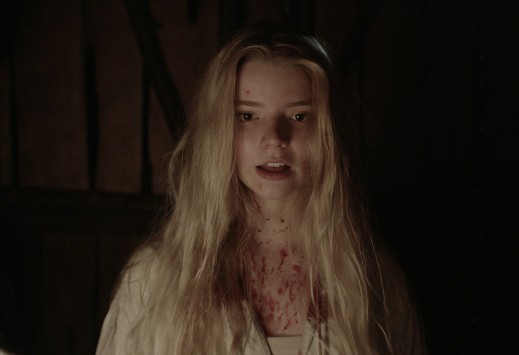 Last year I praised The Babadook for its resemblance to how real nightmares feel; less out and out “scary” than filled with dread about things we realize are beyond our understanding. Most horror movies only ask the audience to play along. But the best ones demand a closer sort of engagement to the material; if you watch passively, expecting aggressively shocking imagery, you might miss most of the movie.

The Witch is somehow an even more evocative, rich experience than The Babadook. It is the sort of film that envelops you, like a dream where you close your eyes and still see as clearly as you did before. It works so well because the fears it evokes come from places deep within just about anyone. I can’t say I’ve ever been chased down a dirt road by a man wielding a chainsaw, but I have stood on the edge of a treeline and wondered what secrets lay further in the dark. As the family at the center of The Witch comes apart, it begins not to matter whether or not they are being stalked by actual witches; I began to believe that anyone in their situation could completely unravel.

The film opens with a man named William (Ralph Ineson) being exiled from a Puritan community somewhere in New England. He and his family eventually settle in a clearing where they build a cabin and attempt to farm. He and his wife Katherine (Kate Dickie) talk openly of sending their oldest daughter, the teenage Thomasin (Anya Taylor-Jones) away to work as a servant as soon as she is old enough. Pragmatism trumps family bonds in their situation, and Kate seems to care little for Thomasin as it is; she openly prefers her other four children; Caleb (Harvey Scrimshaw), twins Mercy and Jonas (Ellie Grainger and Lucas Dawson), and the infant Joshua. Thomasin works hard and seems to at least have the affection of her father, but early on it feels like little provocation will set this family against itself. William is deeply prideful, and Katherine is openly resentful that the family moved from England. Caleb is hitting puberty and grapples with the awakenings that come with it. Everyone grapples with their austere religious beliefs that seem to bring none of them any peace of mind.

As I said about The Babadook, there is already a lot in this premise to make for a compelling story without any horror elements. There is a memorable setting, well-defined characters, and plenty of conflict. Director Robert Eggers begins to sprinkle diabolical elements on like spices; the film’s transition into horror is so deft that we barely notice it happening.

It begins when Joshua disappears as Thomasin is watching him. Again, the scene plays out like a nightmare, but not necessarily as supernatural one. Anyone can relate to the cold terror of suddenly now knowing where a baby is. Joshua’s disappearance hardens Kate; she blames Thomasin for losing him and William for moving them out into the wilderness in the first place. The twins goad Thomasin, and she silences them by claiming to be a witch (a moment of teasing with profound consequences for Thomasin). William desperately clings to his belief that if he works hard enough he can provide for his family out here, even as it’s clear that he’s in over his head. At this point The Witch is already a nightmare. And then the film cuts to a gut-churning sequence of a woman in the woods slathering herself in a baby’s blood.

The Witch is the sort of film that a horror nut might easily be disappointed by. If you want a story strictly about witches making lotion out of babies, then no, this is not that sort of film. It is the sort of film that punctuates realistic tragedy with evidence enough that a malevolent hand is at play. These characters are already without much hope. If they are at the mercy of witches, the possibilities are too upsetting to imagine. Eggers also allows his actors to carry much of the film. He’s not manufacturing scares; he lets the actors react to the situations they confront as people might. Again, it’s not scary in the traditional sense, but is deeply unnerving. Ralph Inseon is particularly good in this film. He plays William as a man whose love for his family can be overpowered by his need to prove to himself that he is a provider. He is perhaps the last character to acknowledge the possibility of witches, despite being deeply pious. When he begins to suspect that Thomasin is a witch, the fact that he has turned is itself terrifying.

The Witch is a difficult film to review. It is more about what it does to the senses that what happens in the plot. Most horror films are roller coasters, their stories on a predictable track. The Witch is a nightmare. It doesn’t hold you by the throat so much as linger in the back of the mind, asking you to second guess everything you see. It’s no surprise that the film settles on Thomasin as its protagonist. She might seem like a passive character at first. Anya Taylor-Joy plays her with wide-eyed earnestness. Her wants are simple (her mother’s approval; her family to not die one-by-one; to not be hanged as a witch) and one by one her avenues of hope are closed off. It could be the woods. It could be witches. The film’s finale is as wicked as it is surprising. If nothing else it provides Thomasin with an earned payoff for going through hell.

One response to “The Whispered Nightmares of “The Witch””