Game of Thrones, Orange is the New Black, and earned tragedy 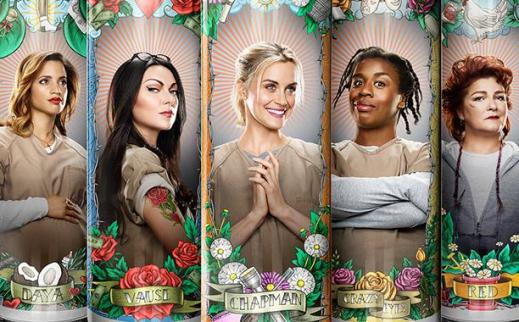 On last week’s episode of Game of Thrones, a young girl was burned at the stake. Unsurprisingly, as is often the case with this show, there was a sizable negative reaction to this turn of events. If nothing, Game of Thrones is a reliable delivery system for shock. The death of Shireen Baratheon by flaming filicide (her murder was given on the order of her father, Stannis, on the recommendation of the priestess Melisandre) might have been the most disturbing moment yet on a show rife with them.

And yes, the scene delivered its intended impact. It deeply disturbed me. Although the show had good taste enough not to show Shireen burning, her screams of agony were enough to make to turn off my TV and not finish the episode. But when that feeling of disgust faded, there was nothing left. I’ve made this complaint before. The show has become too reliant on shock without substance.

I was not alone in being critical of this scene as wallowing in nihilism without having anything to say. But I also think that talk of how much the scene disturbed us overshadowed how awkward and contrived it was. Although the scope of Game of Thrones sometimes necessitates telling the story in broad, unsubtle strokes, the circumstances leading to Shireen’s death were too stilted for me not to notice.

In the waning minutes of the previous week’s episode, Ramsey Bolton suggested to his father Roose that he take 20 men to raid the invading Stannis Baratheon’s camp. It seemed to be a setup for something significant, something meaningful in its own right; perhaps a showdown between Stannis (a character who had come to life this season after having little to do before but look dour) and Ramsey (who has assumed the late King Joffrey’s mantle as the most vile character on the show).

Instead, Ramsey’s raid was portrayed as almost an afterthought; some shots of a few burning tents. We are told after the fact that the raid was actually incredibly damaging, wiping out much of Stannis’s food supply. Now, he is told that his only option if he wishes to defeat the Boltons is to sacrifice his daughter to the god R’hllor. With nary any true hesitation, he does so. Shireen dies horribly soon thereafter.

The plot bent over backwards to create a situation where Shireen died. It came across like a child improvising a story on the fly, spackling gaps in logic as they go along. I have not read a convincing argument that Shireen’s death adds anything to the plot but shock value. There was more than setup enough to create ample drama, with the brilliant general Stannis preparing to do battle with the ruthless and wily Boltons for control of the North of Westeros. As the flames rose the message seemed clear: Shireen had to die to shock us.

Worse yet, this revelation that we only got to know Shireen so she could die horribly rendered many of her previous scenes during the season trite. Earlier in the season, there was a wonderful scene between Shireen and Stannis where he told her the story of how he refused to let her die when she was inflicted with a horrific disease as a baby. It was the sort of character-driven storytelling Game of Thrones almost never seems to have the time for. Now, the scene comes off as a cheap trick, some sentimental foreshadowing designed solely to build Stannis up as a good father in one scene simply to tear him down later. A great character moment is ground up in the gears of cheap plotting.

A few hours ago Orange is the New Black debuted its third season on Netflix. It’s late as hell and yet what I just watched compelled me to write about it. In the third episode of the show, Nicky Nichols (Natasha Lyonne) is pinned for dealing heroin. She is shipped off to a supermax prison, which is the closest the show usually comes to a significant character death (I’ll never forget you, Miss Claudette).

As Big Moments go, this was one of the most heartbreaking Orange is the New Black has ever delivered. I’m still reeling from it. And that’s because there is no shock to this moment, only earnest sadness. Nicky Nichols is self-destructive. A former drug addict, she seems to be in perpetual search of ways to get high without narcotics. This season, her plan was to try to sell a supply of heroin that ended up in her possession. It felt like a ticking time bomb. It felt completely in character. I did not know where the story was going with this plot, only that it was in keeping with a character incapable of helping herself, who knows that about herself, and is heartbroken by it as she once again crashes and burns.

The show’s cruel twist of the knife was not screams of physical agony. It was that the drugs that Nicky got sent away for didn’t belong to her, but rather to the sleazy prison electrician who she’d made a business partner on the drug deal. She had gotten away with her plan. It didn’t matter.

I don’t know if this is the end for Nicky Nichols on this show. I’d be deeply saddened if we were to lose Natasha Lyonne’s splendid performance so early into the season. But at the very least, this turn in the plot is effective storytelling. Tragedy is less effective when it is assumed that misery is inherently meaningful. True tragedy is when a character cannot kill the demons in their nature. We don’t know how their story will end, only that they will almost certainly undo themselves.

Is it unfair to compare an epic fantasy to a character-driven prison dramady?

No. It’s not. Game of Thrones used to know this aspect of tragedy. Ned Stark’s tunnel-visioned nobility was his undoing in season 1. Robb Stark’s inability to be pragmatic while keeping less-than-savory allies happy led directly to the Red Wedding. These two moments, perhaps the high standards for Game of Thrones shocks before this season, were not intricately developed, but they were absolutely character-driven. They seemed to spring from nowhere because the plot didn’t have to twist into knots to make them happen. They were fires finally erupting after the characters had been unknowingly piling on the wood.

Orange is the New Black has mastered this form of storytelling. The lives of dozens of characters weave together, forming a cohesive narrative with almost no overarching plot. It finds the tragedy in human flaws, and turns that into moments of truly crushing sadness, usually without anyone dying horribly.

Game of Thrones is at its best when it does more or less the same thing. The throne is a MacGuffin, something for characters to focus on, to give the story some form. When the plot takes over, and begins to dictate the actions of the characters, the spell the show casts on us comes undone. The characters cease to be people; they becomes a means to a miserable end.