Hey all! Here is part one of my online, written out version of my Anime Boston Panel. Two more parts are forthcoming. There will be extra content in these posts that wasn’t in my panel because I’ve had three weeks to think about them. Consider these a director’s cut.

Part 1: Light and Whisper of the Heart

Describing the basics of the visual language of movies can take a long time and be very boring and who wants that, so here’s a quote from Martin Scorsese talking about light:

“Light is at the core of who we are and how we understand ourselves.”

All right, so why did I throw that little nugget in there?

Knowing the context of that quote helps. Last year, Martin Scorsese gave a speech at the Kennedy Center about the language of cinema. The alphabet of that language, Scorsese argues, consists of lighting and movement. Now, I have a lot to say about the movement in Whisper of the Heart, but for this discussion I’ll focus on light.

Scorsese went on to talk about how crucial light is to creation stories. Consider the first three lines of the Bible:

1 In the beginning God created the heaven and the earth.

3And God said, Let there be light: and there was light.

From a storytelling perspective, light is hope against despair. It is possibility in the face of confusion. It is that inkling of inspiration flying free from the tendrils of doubt.

You also need light to see a damn thing. You may as well use it creatively.

Now, let’s watch the first few minutes of this movie. Watch the whole thing you really feel like it (and you should as it is an amazing movie) but for the purposes of this post I’m going to stop right when Shizuku exits the grocery store.

I love this opening. It’s a warm blanket and cup of cocoa of an opening.

What makes it so cozy, though? And more importantly, how does this opening begin telling this movie’s story? The answers actually go hand in hand.

Remember what I was saying about light before? Yoshifumi Kondo’s use of light in this sequence is telling right from the outset. 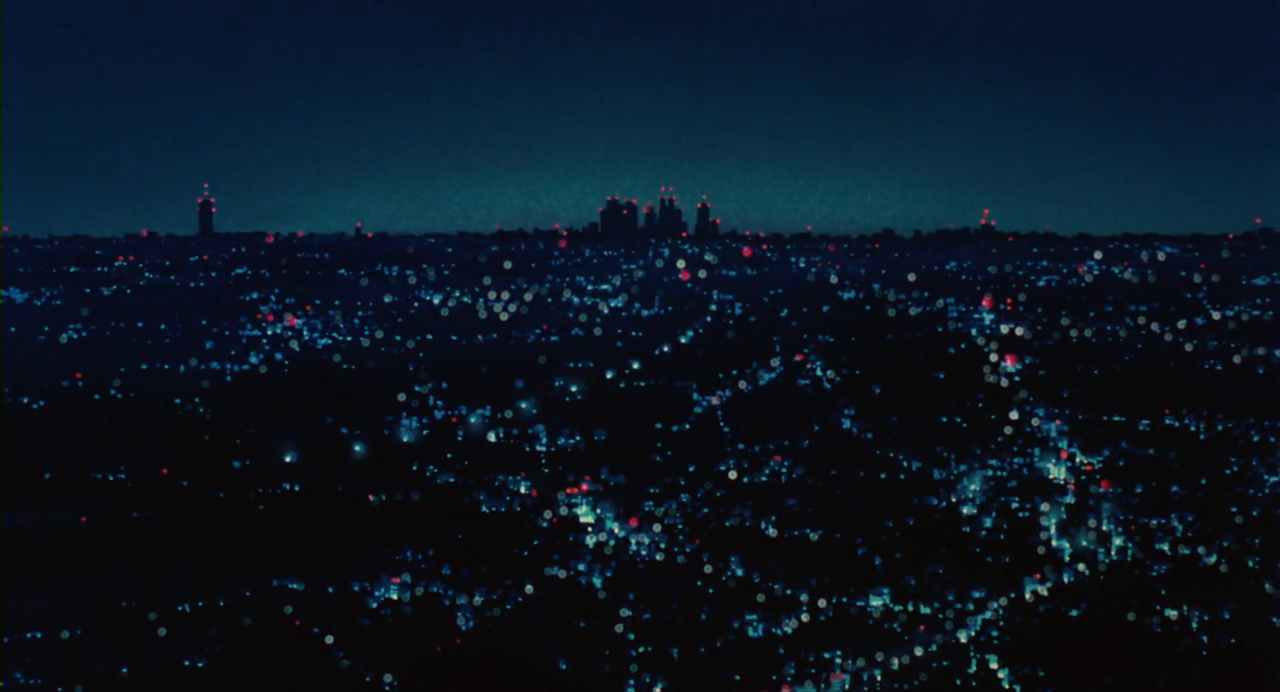 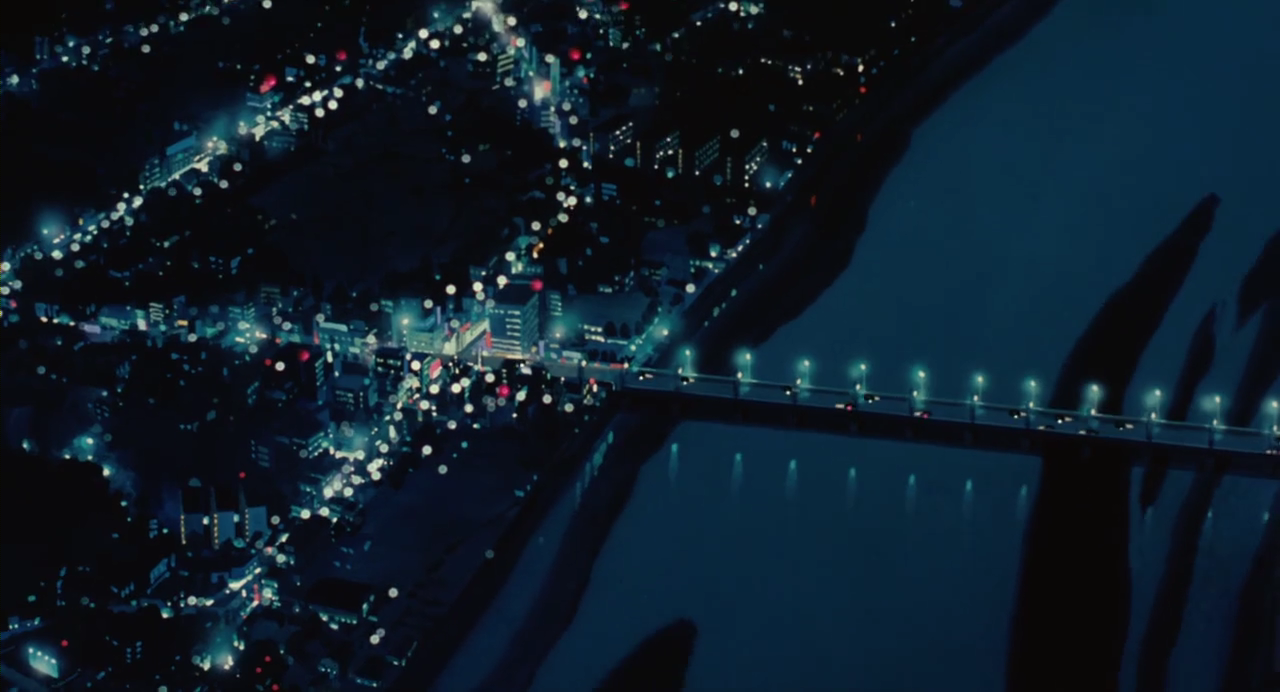 It’s easy to sit here and tell you that these shots are warm and comforting and just hope you believe me. But it’s important beforehand to consider how cities can take on characteristics of their own in a film.

For example, consider this first shot of the skyline in Dark City, the 1998 sci-fi film by Alexis Troyas (and my personal favorite sci-fi movie). You can barely see a damn thing haha it’s called Dark City I get it now!

The skyline in Dark City is imposing and obscure and impossible to see because that’s the role it plays in this movie. This is a city that changes itself every night, a city that is unpredictable and even deadly. You can’t rest on your feet in this city. It’s scary, mysterious, and the opening shots tell us that right away.

Let’s look then at another famous skyline: For the purposes of The Wizard of Oz, the Emerald City skyline needs to serve the opposite function as the Dark City skyline. It is bright and towering and a beacon of hope for our already optimistic crew. It shimmers in the distance, resembling not so much a city as a mythical rock formation, bursting with magic and possibility. It’s literally at the end of their damn trail this movie isn’t trying to be subtle here.

Skylines set the tone for their movies at both ends of the pole here. So where does Whisper of the Heart fall? Somewhere much closer to Wizard of Oz, I think. Let’s look again at that image of East Tokyo.

At first glance, there’s not much more here than an establishing shot. But there’s a watercolor quality to this image, and coupled with the music it’s a very inviting cityscape. This is not ominous. It’s more akin to The Wizard of Oz, bright colors, a sense of warmth, even a bit of mystery; while the Emerald City looks more like a beacon, a landmark than a city, this snapshot of East Tokyo invites us to peer in deeper and to learn more.

As the opening progresses, the portrait of this neighborhood only grows more inviting: 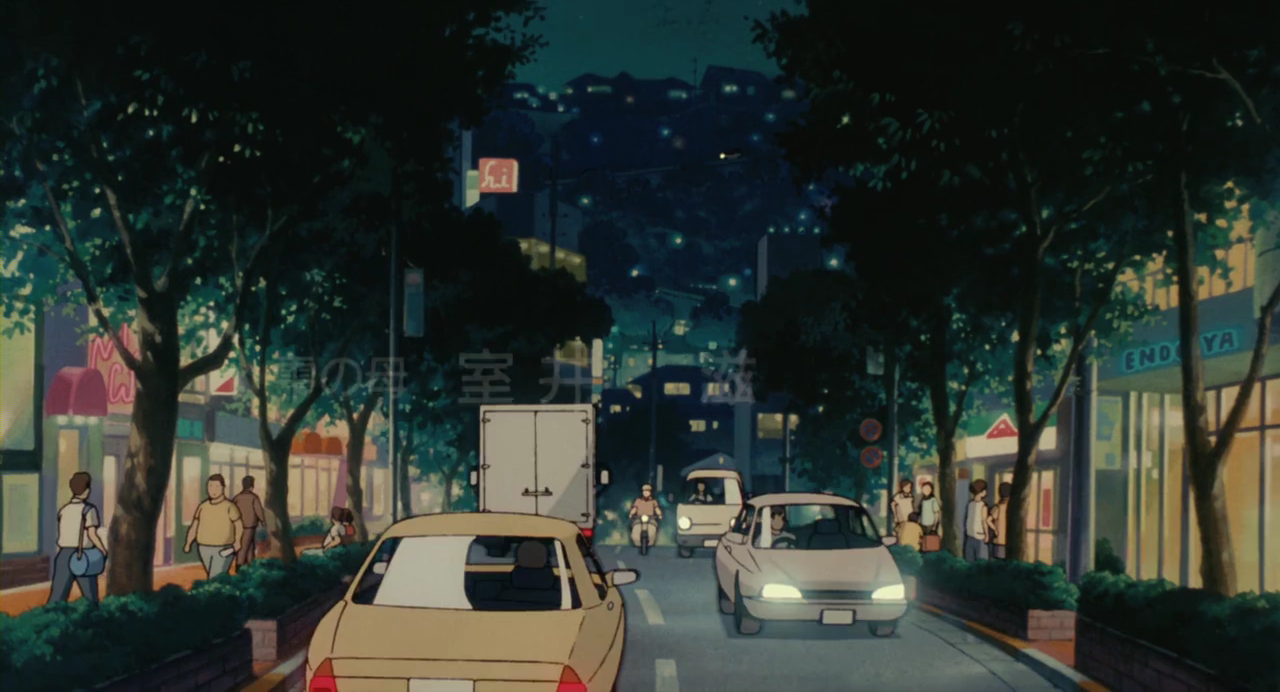 This is the first ground-level shot of the neighborhood, and isn’t it just cozy? Brightly lit storefronts and cars in the foreground, a meandering road leading up to the neighborhoods on the hilltops, speckled with multi-colored lights of their own. Turn off the storefronts, remove the cars, darken the hill, and you’d have a shot ready-made for a ghost story. Instead, Kondo goes out of his way to make us feel at home here: 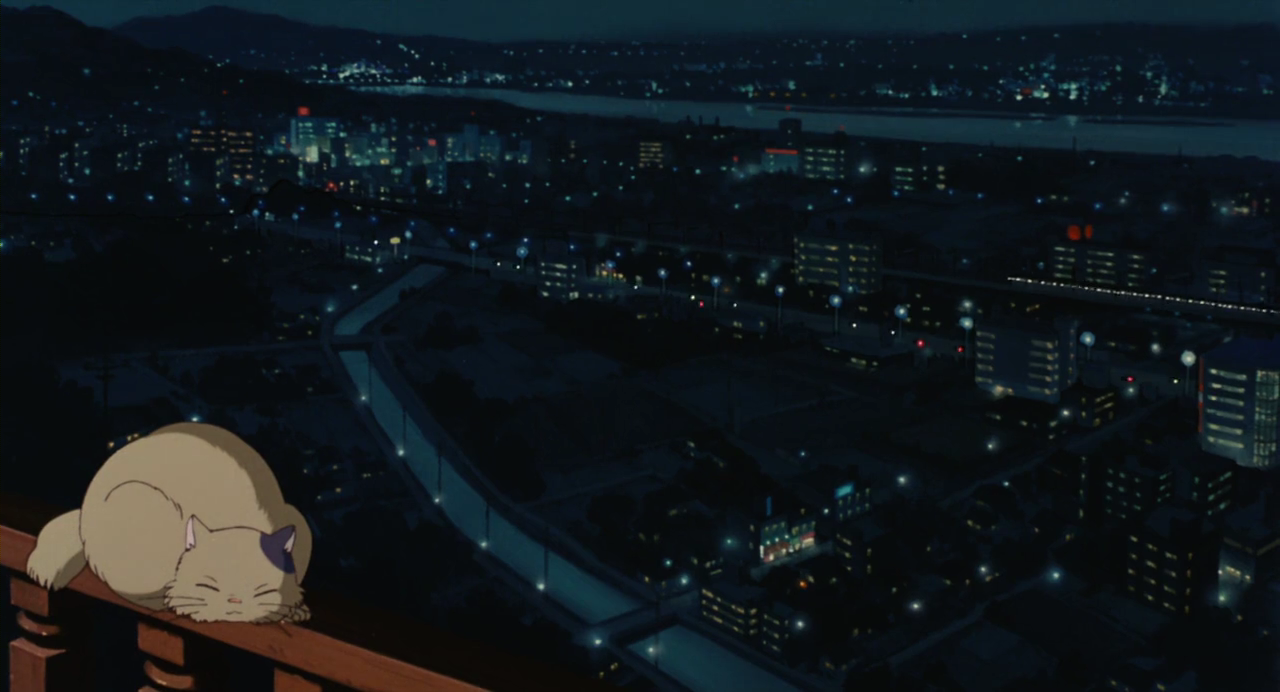 See what I mean? Here we get another shot overlooking the city. However, instead of the detached, birds-eye view from the opening shot, we get a view from someone’s back porch! Hell, there’s even a sleeping cat perched there, the light from the house reminding us that we are home, no longer wandering (or… flying?). The colors of the skyline are more defined than the watercolor splotches of the opening. Again, the key here is tone: a city and its skyline can help define the tone of a scene. Uncertainty makes us paranoid. This shot, coupled with the ones before it, create about as human-feeling a city as you’ll find. 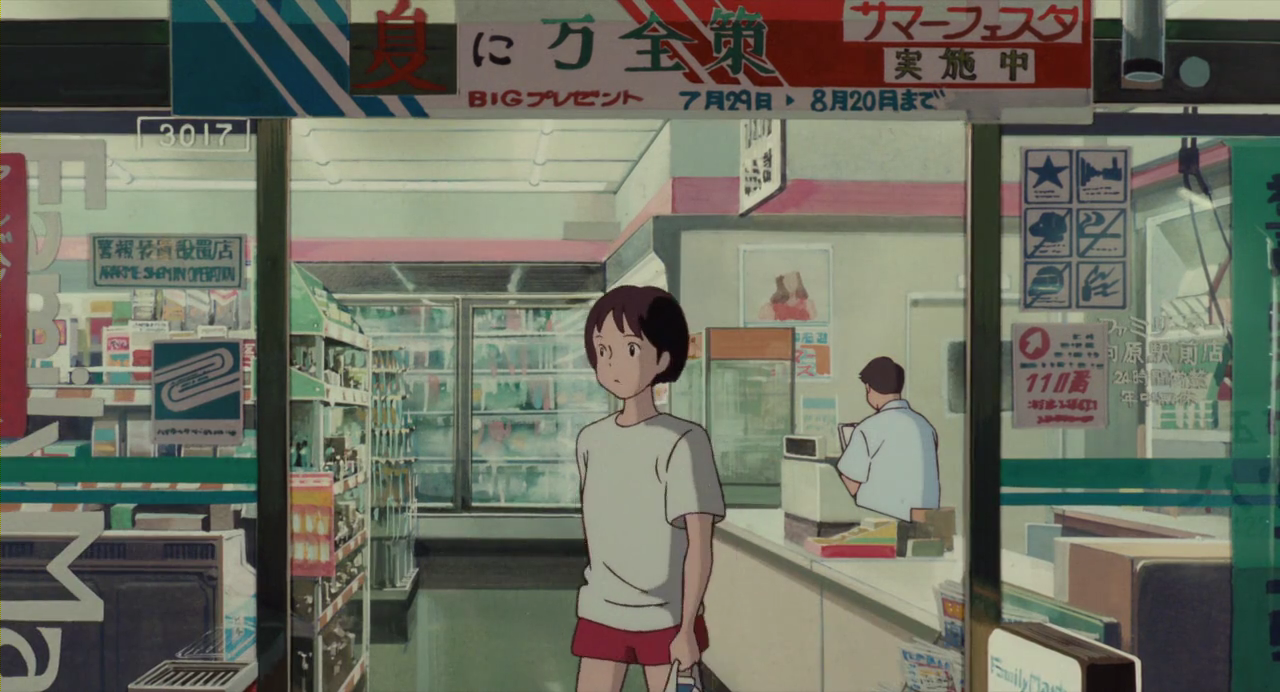 And here is the first shot of our protagonist, Shizuku. The film has finally established its where enough to begin to show us the who that live within. Again, note the lighting; we can only tell it’s nighttime because of the shots that came before.

Shizuku is walking out of a grocery store, a location that is often used to symbolize all that is sterile and nightmarish about quiet suburban life. In The Hurt Locker, a grocery store is more frightening to Jeremy Renner than defusing IEDs in Iraq.

Whisper of the Heart isn’t interested in portraying suburban unrest, however. For the purposes of this story, this little corner of the city needs to feel warm and comforting. It needs to be the light at the beginning of the tunnel. The significant lyric within the song playing over the scene is not the “country roads” at all; it’s where they lead, and where Shiziku is headed: home.

So why are light, comfort, and “home” so important to this opening? Whisper of the Heart’s drama hinges almost entirely on uncertainty. Not just any uncertainty, but the uncertainty of adolescence. Shizuku worries that she might not get into a good high school. It might not matter, because all she wants to do is write, and she worries she might never be good enough at that. The boy she thinks is her adversary turns out to be pretty cool. She likes him. A lot. Except he plans on leaving Japan for an long apprenticeship in Italy. These are all find and dandy plot points, but they don’t resonate unless it’s clear that they are genuinely shaking Shizuku’s world. And the best way to tell a story of teenage drama and make it resonate is to start at a place familiar and comforting, so that we understand how much each aspect of the story poses such a genuine challenge to Shizuku. It would be easy to turn this plot into a comedy. But when romance and school and anxiety are what you are venturing into from a place of unpreparedness, they can seem as dramatic and profound as anything.

And that it why it’s crucial for Whisper of the Heart to establish a sense of “Home” in its opening scene. And that is why the lighting is key. We aren’t just meeting Shizuku here; we are visiting her home. We start high above her city, narrow our view down to the street until we find Shizuku, and then she leads us to the place she is beginning from: her apartment, where she lives with her parents and sister. There was no plot-related need for Yoshifumi Kondo to take this roundabout way of introducing us to Shizuku. He could have started at her school, or in the library, anywhere he saw fit. Instead, he introduces us to her home first. This is a film about a teenage girl realizing that she is going to have to find her place in the world, that growing up can be a terrifying thing, even when (and perhaps because) it so often consists simply of waiting through the unknown. And that carries far more weight if the place from which we launch is well-established. Once we feel at home, we don’t want to leave. Whisper of the Heart is about that feelings that arise when we realize that staying forever is not an option.

(I will work on parts 2 and 3 soon, but this one post has been holding up my blog forever, and I’m desperate to write a few more non-Ghibli posts this week)

(also: all uncredited images were captured by me)