Game of Thrones and the art of the monologue 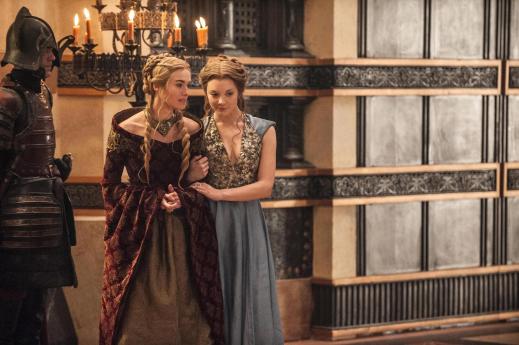 Spoilers for Game of Thrones ahead.

Thinking back on the last two seasons of Game of Thrones, some of the most memorable scenes have been monologues. Monologues, hypothetically, are all tell and no show. To be effective, a monologue relies on both the writer and the actor for the speech to be more than just information to move the plot forward; they must tell us something about the person delivering the monologue, or shed new light on previous events, or otherwise do more than just pass the time. Done wrong, as The Walking Dead has done far too often, monologues become a lazy substitute for character building and drama, pretending that two characters engaging in extended whisper fights constitutes drama. But done right, as Game of Thrones does time and time again, a monologue can be as brutal or heartbreaking as any wordless action.

I’ve singled out three monologues from the show, each one delivered by a Lannister sibling, each telling a story about their father that ends up being much, much more than a simple tale.

The first is from the season one episode “Baelor”, the scene that likely won Peter Dinklage his well-deserved Emmy.

The information conveyed in this scene is important, yes. It tells us a cruel story from Tyrion’s childhood that helps us understand why he has embraced a sort of detached playboy mentality, and why he has such loathing for his father. One of the main criticisms of The Walking Dead is that it devotes so much dialogue, walls and walls of dialogue, to characters fighting about things we already know about without shedding new light on anything.

Here, in just a few minutes, a poisonous relationship is laid bare. It’s crucial for the show to establish just how far Tywin’s heartlessness extends. He is not just a bitter old man. He has no love lost for his own children, and the extent of his cruelty is frightening to imagine. This scene is a heartbreaking moment for Tyrion, but it also quietly establishes Tywin as an even more fearsome force than we could have known before. As expository dialogue goes, it’s hard to get more multi-purpose than this.

The second monologue is delivered by Jaime Lannister to Brienne of Tarth, his unlikely travelling companion with whom he develops an even more unlikely bond as she tries to deliver him back to the safety of King’s Landing.

In this scene, Nikolaj Coster-Waldau delivers perhaps the single best-acted moment in season 3, which is saying something. The show has become a murderer’s row of strong performers. Emilia Clarke earned a well-deserved Emmy nod this year, joining previous winner Dinklage, and nearly a dozen other actors in the show have an argument for consideration (Coster-Waldau, Michelle Fairley, Lena Headey, Charles Dance, and Natalie Dormer would be at the top of my personal list).

But his performance here tops all others, as I see it. Like Dinklage, Coster-Waldau delivers a personal anecdote, this one the first full account of the incident that gave him the title that haunts him to this day: Kingslayer.

There is a lot of history to parse through in this monologue. But Coster-Waldau delivers it with so much bitterness and regret that it feels like we’re intruding on his most deeply private thoughts, not listening to history lecture. This scene is heavy with catharsis: We’ve seen aloof Jaime, incestuous Jaime, attempted child-murderer Jaime, badass swordfighter Jaime, and most recently before this scene, suddenly one-handed Jaime.

But this scene peers a little deeper into the past of a man who has lived his whole life branded a traitor and coward. It finds that the act that defines him (to Westeros, at least; the viewers still know he tried to murder Bran Stark) is one that many others, perhaps almost all others, would have done in his situation; trading the life of a mad king for that of his father and an entire city.

Jaime is many things, and here we find that his devotion to his family exceeds most anything else. His glib line, “the things I’ll do for love,” when he pushed Bran out of a window seems less flippant now; here is a man who would kill a king and be branded a traitor rather than betray his own father. It doesn’t make Jaime a good man, but it makes him a much more complex one.

The third monologue is a quiet scene, so quiet that it could easily be lost in the chaos that surrounded it in season 3. The monologue is part of a conversation between Natalie Dormer’s Margaery Tyrell and Lena Headey’s Cersei Lannister. Margaery has been slowly making inroads within the royal family leading to her marriage to Joffrey Baratheon. She has been a cunning, delightful character to watch, and the scene in which she flirts with her sadistic, psychopathic fiancee by feigning an interest in crossbows and hunting was one of the most nerve-wracking scenes of the season, and ultimately triumphant for her, as she won the most unstable character in Westeros to her side.

In this scene, she is trying to make sweet small talk with her future mother-in-law and sister-in-law (oh Tywin, you and your heartless marriage arrangements). Cersei replies with a story about the origins of the Lannister family’s signature song: “The Rains of Castamere”.

This is a brutal little verbal beatdown by Cersei. Functionally, she makes it clear that she wants nothing to do with Margaery, and will always view her as an adversary. It’s a setback for Margaery, who had seemingly been effortlessly charming over her new family. And yes, reminding us of this song in such a vivid way ends up being a nice bit of foreshadowing for its truly memorable use in the next episode, when a performance of the song directly precedes the now legendary “Red Wedding”.

But consider how deliberate this show is. A warning this sinister does not apply to just the Tyrells; look at how the Starks were reeling all season after Rob lost the support of the Karstarks and was forced to go grovelling to Walder Frey. Even if you didn’t see the Red Wedding coming, this scene sets it up beautifully. “Game of Thrones” tends to use its largest plot upheavals in its 9th, penultimate episodes; this scene comes at the end of the 8th. For those who didn’t know the Red Wedding was coming, this scene is like a warning written in stone.

It’s a beautifully efficient use of about 90 seconds of dialogue. Like The Walking Dead, Game of Thrones is a very talky show. Unlike The Walking Dead, Game of Thrones’s dialogue is rich, evocative, and constantly moves the story forward. It’s aided by the very, very good cast, of course, and writers who know that the right choice of words, delivered perfectly, can alter the mood and change the course of a story as vividly as any other scene.